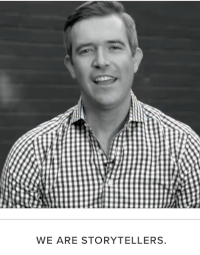 This month get some insight into what's happening in the our television newsrooms. Craig will provide a look into his news experience, the state of local and national news, why he and many reporters are getting out of the business, and of course a little bit about his new venture, Lucie.

Craig started his company, Lucie,  to shine a light on the positive things happening in our world and to share compelling stories that resonate with your audience. With two decades of news experience, multiple EMMY nominations, winning an EMMY for Best News Anchor, you know that you will be in for a story that you won't want to miss.

But his story is about more than just him, he'll be sharing the following about how you can share your story:

He has also received several AP Awards for his reporting and contributed reports to newscasts that have won the prestigious Edward R. Murrow awards. The Georgia Association of Broadcasters also recognized him as the best on-air personality in the state, and the Atlanta Business Chronicle named him as one of the 40 Under 40 recipients. Craig has appeared on ABC’s World News Tonight, CNN, MSNBC, FOX News and HLN. His company uses strategic storytelling and marketing to help businesses and non-profits become their own news outlet without relying on traditional media. Some of his recent work can be seen here: https://www.luciecontent.com/projects

Parking is available behind the building for direct access to the meeting space. The entrance door will be marked with balloons.

Seating capacity will be limited. We will NOT be able to accommodate walkups and we will NOT be doing an online presentation of this event.
When registering for this event please let us know if you are vegetarian so we can provide the appropriate quantities and selections for all attendees.

Cancellation Policy: You can cancel with a full refund by noon August 5, 2020.  After that date no refunds will be given, however substitution of an attendee is allowed if you are not able to attend the day of the event.
Set a Reminder:
Business Directory News Releases Events Calendar Hot Deals Member To Member Deals Marketspace Job Postings Contact Us Information & Brochures Weather Join The Chamber
Go mobile with MyChamberApp!