We are meeting Virtually This Month. 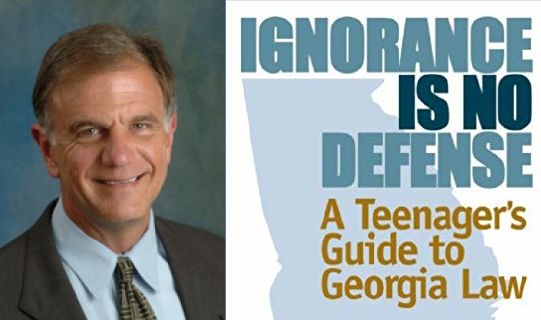 Summer is here and no doubt all the young people in our families and communities are more eager than ever to get out and be social and be entertained. As parents, grandparents, and really anyone who is shaping kids' lives we don't want this time in their lives to be marred by a run-in with the law enforcement.

We're very fortunate to have with us J. Tom Morgan, a highly respected former prosecutor and experienced trial lawyer, to share what we need to know. He is author of Ignorance is No Defense, a Teenagers’ Guide to Georgia Law.  Mr. Morgan will provide straightforward information about Georgia’s Criminal Law as it applies to teens. Engaging and enlightening, He will be providing insight about the Romeo and Juliet legislation, driving curfews, parties in your home, cellphones/social media, and digital footprints. Q&A will be allotted for questions that anyone may need to ask “for a friend.”  Don't let time on their hands lead to time in front of a judge.

For more information on J. Tom Morgan and why this is a very unique opportunity to hear him:

J.Tom Morgan is a nationally recognized expert on the prosecution of crimes against children and has appeared on CNN’s Talk Back Live, the Oprah Winfrey Show, Court TV, the Today Show, and 48 Hours. He served as the District Attorney of DeKalb County, Georgia for twelve years and was the first prosecutor in Georgia to specialize in the prosecution of crimes against children. J.Tom is currently a trial lawyer in private practice in Decatur, GA specializing in criminal and civil litigation.

As District Attorney, J.Tom was the lead prosecutor in the case against former DeKalb County Sheriff Sidney Dorsey, who was convicted of corruption and murdering his opponent, Sheriff-elect Derwin Brown. Following this successful conviction, J.Tom was the first United States prosecutor to receive the Special Achievement Award from the International Association of Prosecutors.

J.Tom has dedicated his career to child advocacy and is committed to helping young people avoid being both victims and perpetrators of crimes. He served on the U.S Advisory Board on Child Abuse and Neglect and chaired Georgia’s Child Abuse Prevention Panel. Recognizing the need to treat victims of child abuse, J.Tom is a founding board member of the Georgia Center for Child Advocacy, Inc., which provides free counseling to children who are victims of child abuse.

J.Tom has spoken to tens of thousands of teenagers and parents regarding Georgia laws that impact young people and has listened to their stories. With an engaging presentation that generates open and frank discussion with his audience, J.Tom is in demand as a speaker at schools, colleges, churches, and other community groups.

The insights J.Tom has gained from speaking with teenagers, as well as his experience as a prosecutor and private attorney, inspired J.Tom to write Ignorance Is No Defense, A Teenager’s Guide to Georgia Law. As a prosecutor, J.Tom prosecuted teenagers who violated the law. He also helped young people who were victims of abuse and prosecuted the abusers. As a private attorney, he defends teenagers who are in trouble with the law. Realizing that many teenagers often do not fully understand the law and its consequences, J.Tom explains Georgia laws in a readable, informative way using real-life examples. Ignorance Is No Defense aspires to help teenagers avoid situations in which they violate the law or are hurt by others who violate the law.

Attendance is limited to 100 people.

The ZOOM login information will be sent to you as part of your Registration confirmation and in a reminder email prior to the event.